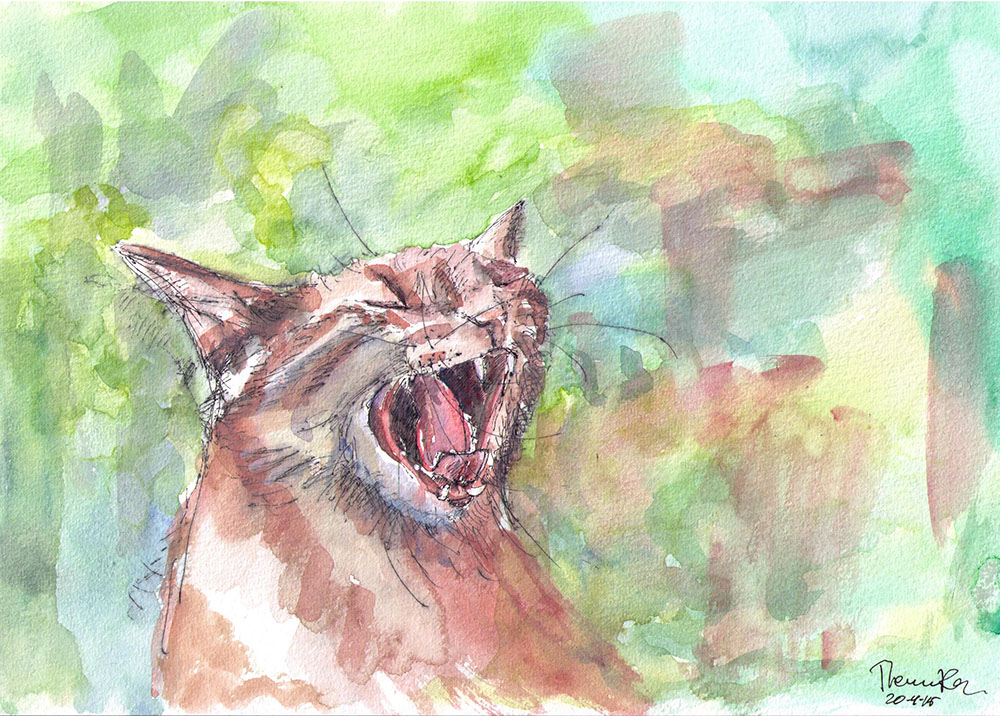 Here’s a cat that Glogirly requested. He’s called Waffles, and i hear that he likes to eat chicken. (And to sing)
I got a commentary from someone who thought that by ballpoint-pen drawings could look nice if I added some watercolor. Little did he know that I’ve already done quite a few drawings with that combo – but it’s already been a little while, so I decided to spend a little of that precious time that I ought have spent on my thesis to draw this cat! Great idea, wasn’t it?
I really liked the photo in question. It’s a beautiful cat, and an open mouth is quite challenging to draw, so I decided to give it a shot. I think that the head is slightly too wide and the mouth not open enough as compared to the reference photo. Waffles also appears to be a little too well fed. Other than that I’m quite happy about the result.
Last time i did a watercolor I ended up saying that I’d be putting my watercolors aside for a while until I get the time to learn to use them properly.. I still haven’t learned, but I think that perhaps they could work in combination with another media. This is it. What do you think?

Also – look in the corner. That, my friends, is my signature. It feels really cheesy to put my signature on a drawing.. I haven’t done it since “making art” is an 8-year old and now, after having put it on, I feel like taking it off again – but there’s no going back with ink 😉 Next time I might just put it on the backside. At some point – when I get good enough – I hope to sell a drawing once in a while.. And “real artists” always seem to put on the signature in the corner.

40 thoughts on “Painting of Waffles the singing cat in watercolor and ballpoint pen.”