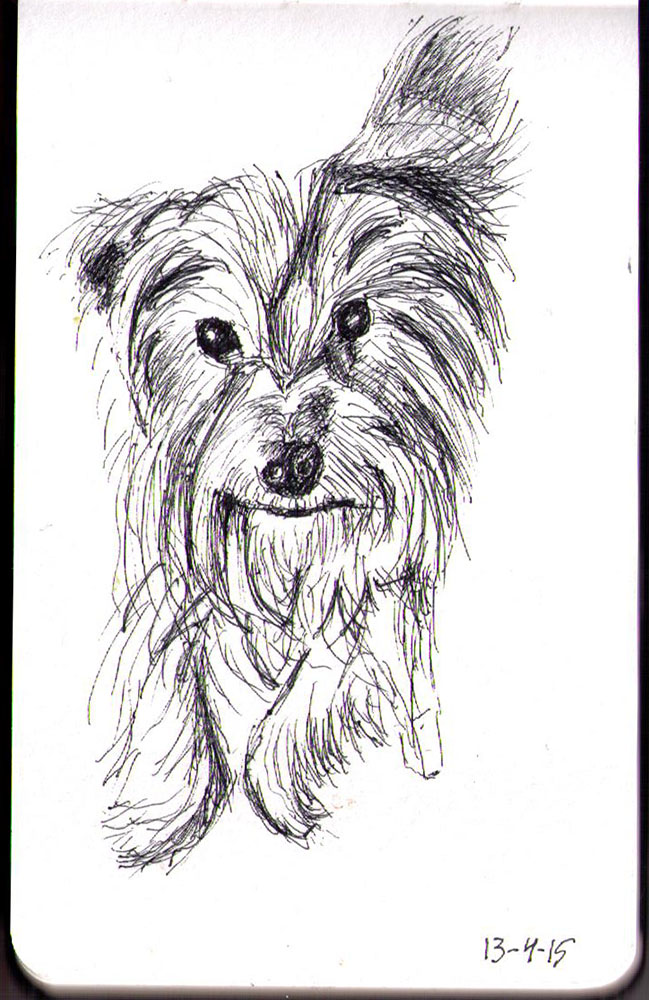 This unbelievable little thing is no stuffed animal – It’s Houdini – a ten-month old Yorkshire Terrier who lives Hotel Thompson with his friend Bacon. Read more about Houdini here.
I think it turned out really well! I don’t normally give in to cute animal photo’s because I’m afraid to forget to eat or something once I get sucked into the internet’s cuter domains, but this little guy, I just couldn’t resist! The photo was really good.. This is obviously an important part in making nice drawings – you need to have some good reference material. Either that, or be a wizard of (dog) anatomy, fur-texture and so on. I still can’t draw anything without “copying” from a photo, or from real life. I’m hoping to learn to “invent” a drawing at some point, but that’s a big mouthful.

In trying to learn about this particular kind of Yorkshire terrier (a so-called teacup yorkie.. maybe it fits in a teacup? ;)) – I found a wikipedia article where it’s mentioned that these dogs often have some medical issues especially during pregnancy because they simply are too small. I certainly am no dog expert, but it’s probably something that one should look into, if one’s thinking about getting one. I have heard similar stories about Pugs – they’re bread to have big heads and small bodies and as a result there are sometimes complications during pregnancy. Even the German Shepherd apparently often has hip and shoulder problems due to breeding practices.. Buying a dog, is no walk in the park, it would seem! I guess that in the end, it’s all a question of finding the best breeder who has the wellbeing of the animal as a priority above anything else. I suppose I just want to say that I hope Houdini has escaped those health issues mentioned on wikipedia. He sure looks like he’s alright 😉

41 thoughts on “Drawing of Houdini, the Yorkshire Terrier in ballpoint pen.”