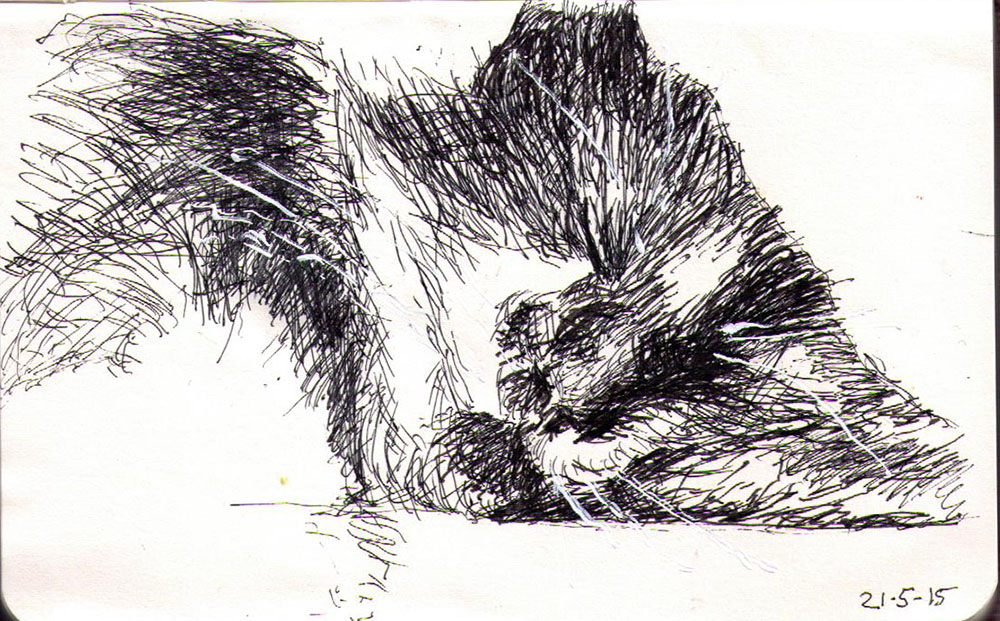 This is today’s facebook request! The cat in question is called Bailey. Bailey appears to be sleeping in every photo that exists of her! You can see the original photo here:
Bailey the cat

As you can see in the photo, this cat is so relaxed that it’s facial features seem to have gone away! It’s almost plan fur, and the nose, eyes, ears, etc are not very clearly defined in the photo. It is as if they have been transformed to a sleeping fur-covered hill on a blanket. Do you know what i mean? Anyway, I thought that this would be pretty hard to draw.. If you can’t well see these things in the photo, it should be much harder to make the drawing read clearly, but I do in fact think that it turned out all right. I hope the owner thinks so too!

Other than putting this up on facebook I’m thinking of trying to see if I can get something similar going on twitter. – The same rules apply: Follow One Drawing Daily on Twitter and tweet me a photo of your pet giraffe (or other pet) and I’ll put it in my daily facebook and twitter drawing draw. I’ve had a profile on facebook for years, but twitter is in fact rather new to me, so I’m trying to figure out how it works! Anyhow – If you’re on twitter (or facebook!) feel free to jump over there and like/follow my page.

10 thoughts on “A sleepy cat called Bailey in ballpoint pen”