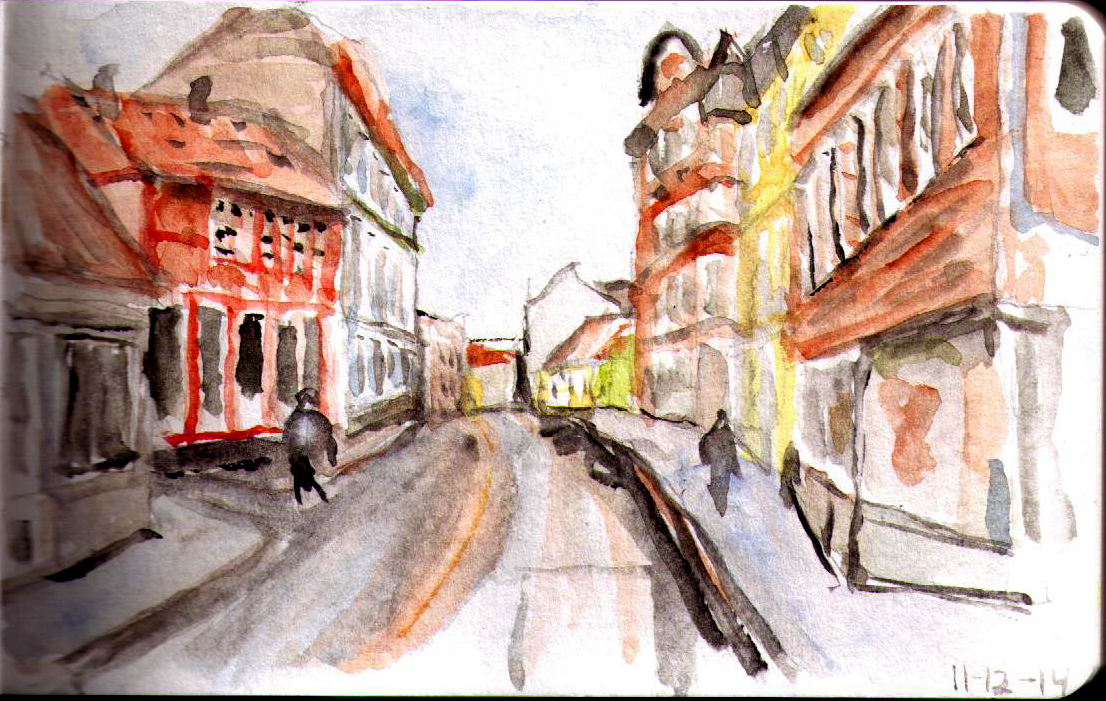 These I’d like to use in my master thesis in architecture school – so I’m working on a good level of abstraction for describing these streets and urban environments. I don’t want to be too detailed – the goal is not to make a photographic representation of the area, but rather to give an impression of the atmosphere, spacial qualities and colours. I think that small watercolour paintings might be the way to go for this. The brush has a certain thickness, and this works as an automatic filter for weeding out excessive detail – with my pencil drawings, it’s harder to chose, and therefore they’re much more complicated to make.

I may do the series of scenes that i intend to use two times in order to get the style refined. I also would like to avoid seeing too much “progress” in skill with the different drawings. They should all be more or less alike, so give the right impression of a series. It’s a little odd to say, but I don’t want to see improvement from my first drawing in the series to the last.

This is a scene from “Mejlgade” in Århus, Denmark. One of the oldest streets in town. This view is where the city-gate was placed in the early middle-ages as-well as the Viking period more than 1000 years ago. I’m working with a site further up the road, on what has been a part of the town since the 14-1500’s. The curved streets and irregular cadernasters of the town bear witness to this epoch, and there’s still a few houses back from the renaissance and upwards. Sadly, Danish towns have been hard on it’s cultural heritage, especially in the 1800’s where a lot of old buildings were torn down and replaced, so although Århus is a really old settlement (it was called Aros by the vikings) – it’s history is not as present as in some European middleage cities.